The cartoon that shows the terrorists who perpetrated the #CharlieHebdo massacre in Paris, being pursued by a thousand pens – and fleeing them – has gone viral on the Internet. True, the pen has some power and it can sting, to the point that Islamic terrorists killed those who wield the pen or the brush, as in the case of the journalists & cartoonists of#CharlieHebdo, who had reproduced the cartoons of Danish paper Jyllands-Posten, that showed the Prophet with a bomb in his turban and done some more.

But in the true world, the AK47 is mightier than the pen – and terror cannot be fought with peace marches, cartoons, 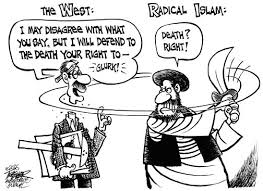 goodwill and the kind of platitudes being mouthed by everybody, including by the many Muslims who tweeted “the French banned the veil, these cartoons insulted our Prophet – but still we against this kind of violence “.

More than that, nothing has changed: those pens who indirectly condone terrorism by always defending Islam are still there. Yesterday night on CNN, an Indian ‘Bobby’ Ghosh (formerly with the Time magazine), who has been against so called ‘islamophobia’ for years and once postulated that “to a believing Muslim, the perception may be that ‘burning the Koran is much worse than burning the Bible, because the koran is directly from God while the Bible isn’t” again mouthed with confidence his stupidities. Or the Financial Times of London, which more or less condoned this massacre by writing: ‘Charlie Hebdo is a bastion of the French tradition of hard-hitting satire. It has a long record of mocking, baiting and needling Muslims.’

Here In India, before news of massacre was known, the awful @SagarikaGhose wrote in the @HindustanTimes “Yes we Khan”, equating Hindu Fundamentalism with Muslim terrorism, when there is no statistical comparison: did any Hindus kill the director of ‪#‎PK‬ or @amirkhan, who made a point of mocking Hindu Gods and gurus a hundred more times than #CharlieHebdo mocked the Prophet?

Make no mistake: whatever the Indian or western Media and the enduring leftist intellectuals, who are like cockroaches

that never die, say, the battle between Islam and the Free world is a war and it will not be won by the pen, but by weapons. To keep on saying, like some of my good and well-meaning friends “that these terrorists are only few isolated maniacs and that the rest of Islam is peaceful’ is a grave mistake, for nearly every Muslim in the world feels that insulting the Prophet cannot be forgiven and we have not seen the six million French Muslims or any other Muslim community in the world, descending in the streets, together to protest what is done in the name of the Koran. Their joining peace marches has no value.

How is it possible that in India, the home of the last living Knowledge in the world, one forgets the eternal message of the Bhagavad Gita : that when your freedom is endangered, your women, your borders, your culture, your very life, it is all right to use force against force, that war may be the last resort against Evil.